Interested in joining the editorial team or becoming a contributor? Do you have a question, comment, or ideas for our next issue? Let us know! Please contact Lucia Moreno Lama on the Communications Committee. 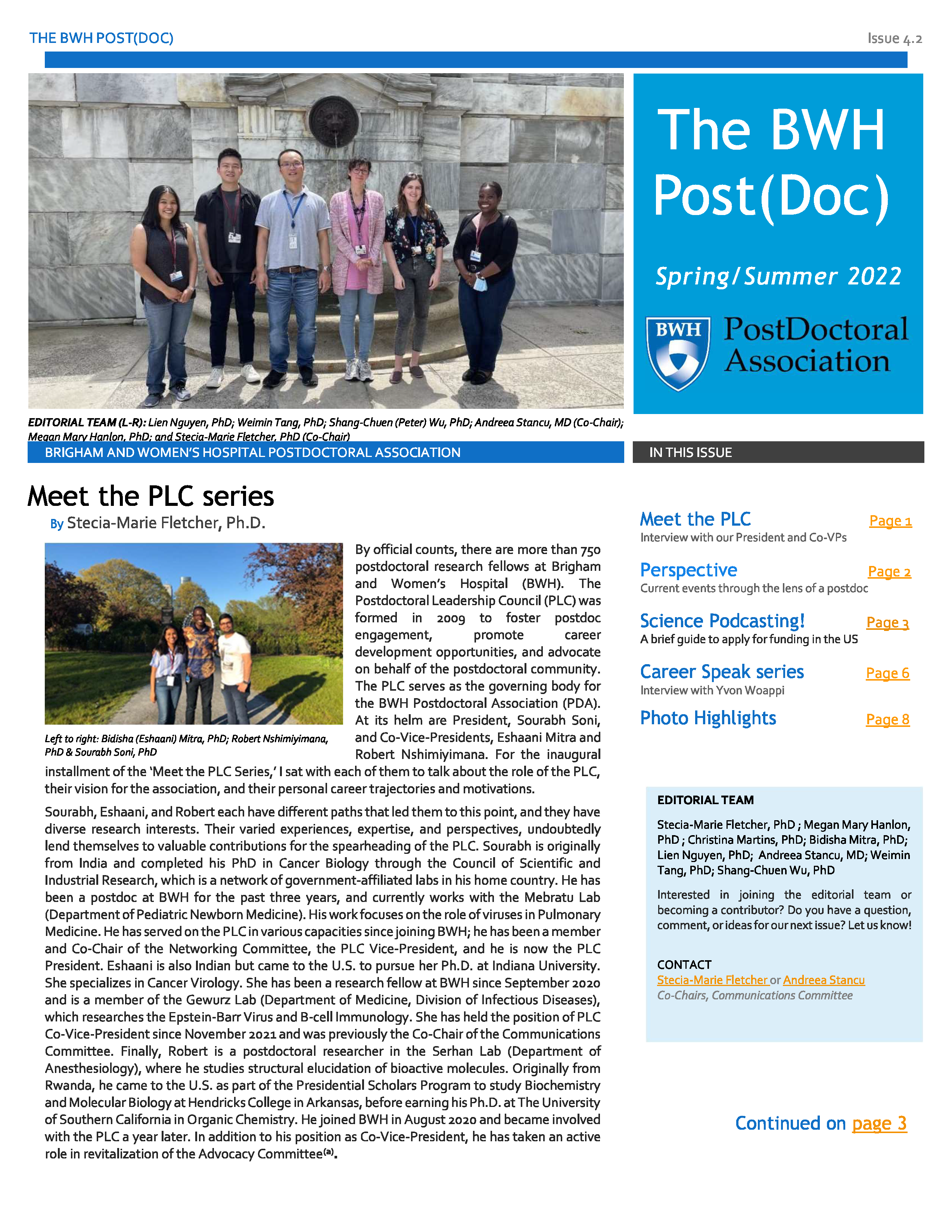 By official counts, there are more than 750 postdoctoral research fellows at Brigham and Women’s Hospital (BWH). The Postdoctoral Leadership Council (PLC) was formed in 2009 to foster postdoc engagement, promote career development opportunities, and advocate on behalf of the postdoctoral community. The PLC serves as the governing body for the BWH Postdoctoral Association (PDA). At its helm are President, Sourabh Soni, and Co-Vice-Presidents, Eshaani Mitra and Robert Nshimiyimana. For the inaugural installment of the ‘Meet the PLC Series,’ I sat with each of them to talk about the role of the PLC, their vision for the association, and their personal career trajectories and motivations.

Sourabh, Eshaani, and Robert each have different paths that led them to this point, and they have diverse research interests. Their varied experiences, expertise, and perspectives, undoubtedly lend themselves to valuable contributions for the spearheading of the PLC.

Sourabh is originally from India and completed his PhD in Cancer Biology through the Council of Scientific and Industrial Research, which is a network of government-affiliated labs in his home country. He has been a postdoc at BWH for the past three years, and currently works with the Mebratu Lab (Department of Pediatric Newborn Medicine). His work focuses on the role of viruses in Pulmonary Medicine. He has served on the PLC in various capacities since joining BWH; he has been a member and Co-Chair of the Networking Committee, the PLC Vice-President, and he is now the PLC President.

Eshaani is also Indian but came to the U.S. to pursue her Ph.D. at Indiana University. She specializes in Cancer Virology. She has been a research fellow at BWH since September 2020 and is a member of the Gewurz Lab (Department of Medicine, Division of Infectious Diseases), which researches the Epstein-Barr Virus and B-cell Immunology. She has held the position of PLC Co-Vice-President since November 2021 and was previously the Co-Chair of the Communications Committee.

Finally, Robert is a postdoctoral researcher in the Serhan Lab (Department of Anesthesiology), where he studies structural elucidation of bioactive molecules. Originally from Rwanda, he came to the U.S. as part of the Presidential Scholars Program to study Biochemistry and Molecular Biology at Hendricks College in Arkansas, before earning his Ph.D. at The University of Southern California in Organic Chemistry. He joined BWH in August 2020 and became involved with the PLC a year later. In addition to his position as Co-Vice-President, he has taken an active role in revitalization of the Advocacy Committee(a).